Jamie and I were introduced some years ago by a mutual friend as we both made mobiles. We have been collaborating on art projects since that time. Around 15 years ago Jamie also decided to train to be a teacher and he is now Deputy Head at our local comprehensive school, so I lead on the art projects and he helps when he can. We both studied languages and literature: Jamie read French and Italian, and I studied English and Russian. Before meeting we both lived in Italy for a number of years. I started making mobiles in Bologna when I was having lessons from a local sculptor and developed my interest further when I moved to Rome.

We are represented by the gallery jaggedart in London and exhibit there regularly, whilst also exhibiting in the north of England in a number of galleries. As well as our smaller-scale work in wood, we have completed a number of larger-scale commissions in metal for public and private organisations such as John Lewis, Olleco, BP and a number of hospitals (The Northumbria Specialist Emergency Care Hospital, West Middlesex Hospital, St. George’s Hospital and Milton Keynes Hospital). More info can be found on the commissions section of the Portfolio page. We have also created a small number of outdoor mobiles for commission and exhibition and this is an area which we are keen to develop further.

We live in Ilkley, West Yorkshire with our two daughters. Living within the landscapes of Ilkley Moor and the Yorkshire Dales is important to our work.

We believe that mobiles possess qualities which make them relevant in a number of ways. These are:

Balance – The world is held in a state of equilibrium which has led to the perfect conditions for life. It is only now that the natural world is at risk that we are coming to appreciate how delicate that balance is and how hard it is to recover it once it has been lost. Mobiles involve the counter-balancing of different, often heavy, elements but the points of equilibrium are miniscule and once found, incredibly strong. Each and every part of a mobile is interdependent and crucial to the balance of the whole. This sense of the whole being greater than the sum of its parts is very much part of how a mobile works.

Freedom within a structure – The individual elements within each mobile have a limited sphere of movement but within that space they explore every possible configuration and relationship. It is impossible to predict the ever changing shapes that a mobile will create as it moves.

Mindfulness and engagement – The fluid movement of mobiles is engaging and invite the viewer to search for the next shape, the next configuration. In this way they draw us in and ground us in the present moment, encouraging mindfulness and contemplation. As a result we have found that mobiles can perform a therapeutic function. Someone once said of them that “the movement creates a stillness in the viewer, rather like watching the sea or the flight of a bird.”

Secondary forms – Mobiles invite us to look at the changing spaces generated in-between the shapes and how they interact with their physical context by creating shadows and framing what is behind them.

Interactive – Wooden mobiles respond to the presence of people in a room. They are very light and any air current causes them to move. 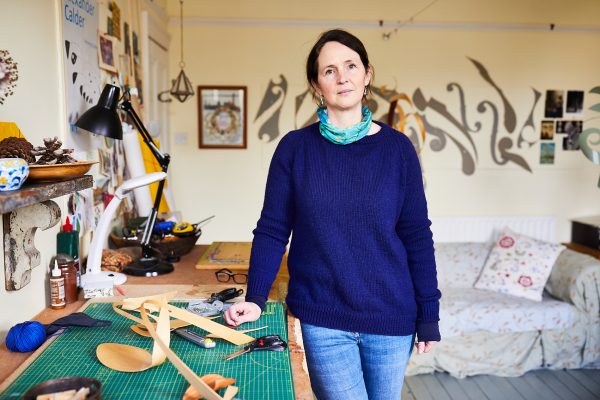 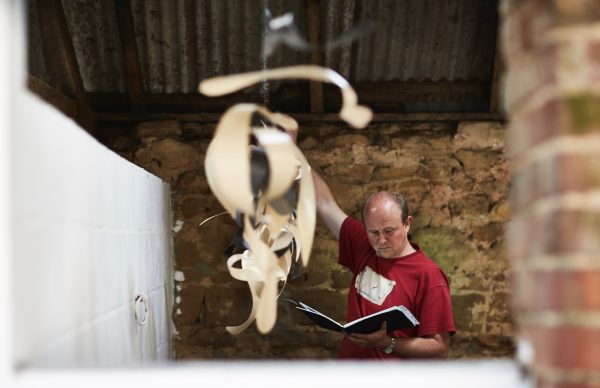 “I have always loved Juliet and Jamie’s work and admired it at exhibitions, but I never anticipated how much I would enjoy living with a mobile in my home. It has become a focal point in our living space: we watch it move, observe the shadows it creates at different times of the day and all of my family have commented on its calming nature. The oak and ash compliment the landscape beyond. It’s unique, beautifully made and a very special work of art.”

“What I love about Jamie and Juliet’s mobiles is that they give me such pleasure. I’ve hung mine in the dining area of my kitchen, and the altering light and air currents of the room reflect on the mobile under which I sit watching it change and move.”

‘It is the silent harmonies which are endlessly fascinating.’

“The exhibition was a delight for the senses. A serene experience of light, music and movement. As you move under and around the exhibits your movement creates their movement changing the shapes and shadows as they turn and dance. Moving under and around felt like being in the boughs of the most exquisite and delicate of trees.”

“A series of light, elegant, beautiful, sculptured mobiles hang like leaves from a tree swirling gently in the air currents flowing around this room. I settle myself onto my seat, calm my mind and focus on one mobile: two of its spirals in balance with a ‘capital C’ shape twist and turn. Another has been strung with about 20 strings. A nod to the instruments that have inspired this exhibition and, to Yorkshire’s revered sculptor Barbara Hepworth. The series of mobiles look ethereal suspended from the ceiling.”

“From my personal perspective it was an intimate, multisensory experience, where three dimensional objects made of natural materials responded to the flow of air and movement of myself and other viewers, who could actively interact with sculptures through walking around the room. The sculptures looked like notes or thoughts emerging from the air of this incredible building. I was totally fascinated by the way mobiles interacted with the people around them and couldn’t stop taking photos.”

“I have a mathematical background, and a lifelong interest in the mathematics of curves, in particular, so I found the experience of being surrounded by so many dynamic curves, of such beauty, quite overwhelming. I don’t mean I tried to analyse them in any way, I was just…. “bathed”, I suppose, in a manifestation of their complex diversity. Quite wonderful.  As the title of the Exhibition suggests, the essence of the whole thing is not in isolated curves, beautiful though they may be, but in their interaction and mutual dependence – where the complexity goes through the roof.”

“I was completely bowled over by your exhibition. I hadn’t known what to expect and was enchanted: the combination of the mobiles hanging from the rafters, and their shadows reflected on the wall, the simplicity and stillness of the ancient meeting house, and then the beauty of the film accompanied by the music completed a multi-sensory experience. I thought the beautifully crafted and shaped mobiles seemed to be suspended in space and made me think of thoughts inside the mind.”

We are currently developing our wooden mobiles to be fully sustainable. This includes every material which we use, from the wood to the glue and the hanging wire. More details to follow.