Above: Trailer for Dovetailing, July 2020

‘Dovetailing’ is a collaborative project exploring luthiery (the making of stringed musical instruments).

Artist Juliet Gutch is creating a series of suspended wooden mobiles. The shapes within the mobiles will be a response to stringed musical instruments and the works will attempt to acknowledge instruments as honed and initially quiet sculptural forms. The materials for the mobiles will take inspiration from those used for violas (spruce and maple). The making of stringed instruments and mobiles share a number of techniques: template making, steam bending, moulding, ribbing and stringing.

Filmmaker Clare Dearnaley is creating a film which explores the journey of the instrument, – from the tree, to the luthier, the composer and to the played music.

Clare and Juliet are working with the world famous composer and viola player Sally Beamish and her viola partner Sophie Renshaw, whose instruments were made by Sally’s daughter Stephanie Irvine and Stephanie’s partner Linus Andersson. Footage will also show the instrument makers at work. Sally has specially adapted her composition Prelude and Canon for the project, and will perform it with Sophie.

Over hundreds of years, the shapes and forms of stringed musical instruments have evolved through the transfer of skills from luthier to luthier. Music played on these instruments often seems to echo the natural world from which the materials for them are derived. In this way, it feels as if musical instruments embody the potential for a balanced and harmonious relationship between humankind and nature.

NB: The word dovetailing is a carpentry term for an interlocking joint which is very strong, and is also used in the making of musical instruments. In addition, the word is used in orchestration and describes the technique of overlapping lines between two musical instruments.

Over the years I have been increasingly intrigued and inspired by how musical instruments are made. Sitting in concerts, it has felt to me that the achievement of makers over time to craft forms which have the potential to create music either individually or collectively is not always fully acknowledged. As audiences we tend to be aware of the composer and the player but rarely of the luthier – the person who transforms natural materials into instruments ready to play.

I have also become interested in luthiery (the craft of making stringed instruments), as many of the techniques are similar to those I use in my own sculpture. I have had a sense that there was a lot for me to learn from instrument makers in relation to my own practice.

I was approached last year by Lotte Inch to exhibit a series of mobiles as part of the festival Bloom! in York and was offered the use of a medieval church, Holy Trinity Goodramgate for the exhibition. For many reasons it seemed to be a perfect opportunity to respond to the making of musical instruments. I was very lucky that Clare Dearnaley, filmmaker, was also keen to be involved and that when I contacted the composer Sally Beamish, she too was interested in the project not least because her daughter, Stephanie Irvine, is a luthier and made the viola which Sally plays. In the early stages of developing this project it was also a great pleasure to visit Hansell Violins in Leyburn and luthier Peter Barton in Addingham.

As Bloom! was due to take place in June 2020 it was, like all other festivals, postponed until safer times. We have continued to develop the project as much as we could during the lockdown period. Sally and Sophie made a remote recording of Prelude and Canon for the London Mozart Players which we are using for this short trailer. We were lucky to have recorded the making of the mobiles in my studio prior to lockdown, and Clare has filmed the footage of the mobiles in her garden along with the trees and the birdsong. A trip to Glasgow in March to film and record Sally and Sophie in Stephanie and Linus’s luthiery workshop got cut short at the last moment by the lockdown, and we are looking forward to gaining footage of the instrument makers at work as soon as it is possible to do so.

The past months have brought into relief the different roles we all play in the world, and of the whole being greater than the sum of its individual parts. Considering music making as the expression of multiple and often complex interactions between humans and materials – from the tree to the luthier, to the instrument, the composer, the player and the audience, – has somehow felt resonant.

We hope that the installation Dovetailing, comprising sculptures, sound and film will be exhibited in other venues in addition to the one it was originally developed for. The various aspects can be reconfigured for different contexts and spaces, and could also incorporate performances and workshop activities.

The trailer above made by Clare Dearnaley gives an initial sense of how the project is evolving. A film for London Mozart Players featuring Sally Beamish and Sophie Renshaw discussing the project and performing Prelude and Canon can be seen here.

Below is a short film showing a trial installation, with the first mobiles hung and the trailer for the project projected onto a stone wall behind. 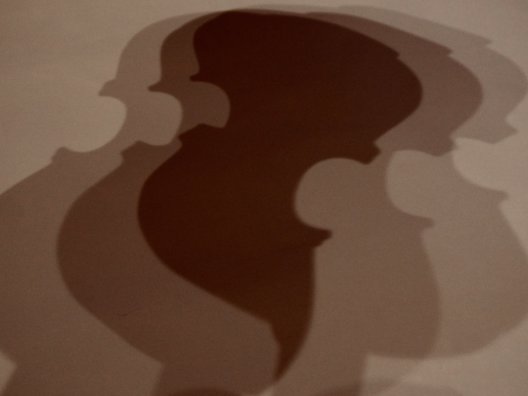