Dovetailing is inspired by luthiery (the making of stringed musical instruments).

The exhibition is collaborative and will include mobile sculpture, music and film.

Sculptor Juliet Gutch is responding to the shapes and forms of stringed instruments with a series of suspended wooden mobiles.

Filmmaker Clare Dearnaley is creating a film which weaves together natural sounds, quiet making, the mobile forms and played music.

Juliet and Clare are working with the world-renowned composer and viola player  Sally Beamish who has adapted and performed a composition for the installation. The exhibition will also feature Sally’s daughter Stephanie Irvine, who is a luthier and who made the viola which Sally plays.

Developed remotely over the last year, the first exhibition of Dovetailing will open in June 2021 at Farfield Meeting House, an early Quaker Meeting House in the Yorkshire Dales (14th – 27th June by appointment only).

The above short film is a promotional trailer. For more information about the exhibition and how to book, please visit: www.dovetailing.co.uk 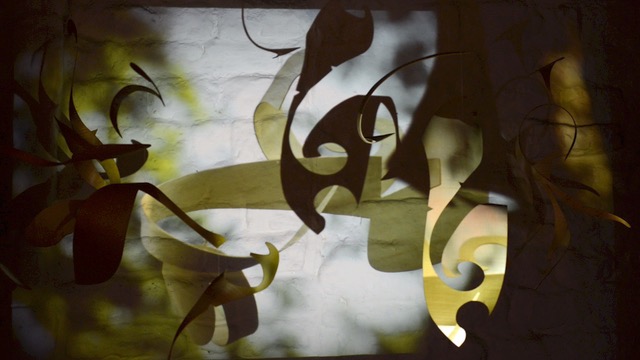 Musical instruments have evolved over many hundreds of years, their shapes and forms developed from natural materials through a transfer of skills, – both technical and intuitive, – from luthier to luthier. Dovetailing is a creative response to this evolution.

Rhythms, harmonies and timbres of music echo back to the natural world, and it feels as if instruments themselves embody the potential for a balanced and harmonious intertwining of humankind and nature. The title of the project, Dovetailing, describes this relationship of two parts by reference to the interlocking dovetail joint in carpentry, – a strong and seamless union. This joint is used in the making of instruments and the word has been borrowed for orchestration, describing the technique of overlapping musical lines between two instruments.

The exhibition explores music as an expression of a number of interactions – from the tree to the luthier, to the instrument, the composer, the player and the audience. 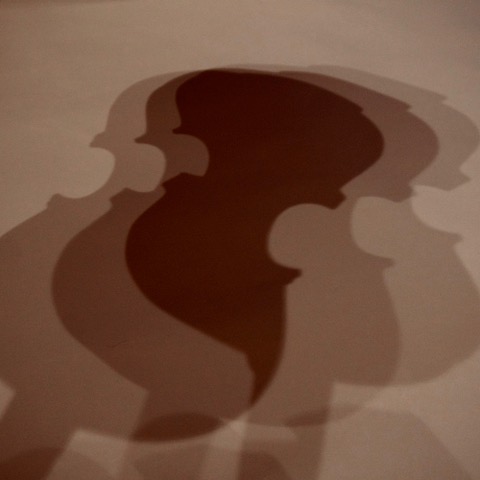 Dovetailing developed out of an awareness I have had for some time that I could learn much from the craft of luthiery. As a maker of suspended sculptural mobiles in wood, my own practice also involves bending and shaping wood, discarding, sanding, honing and waxing shapes. I started visiting luthiery workshops with the plan of making a series of mobiles in response.

The sound of a played stringed instrument is the result of interactions of its own many elements, producing notes of music which radiate from the body of the empty sound box into the surrounding air. My idea was that as well as celebrating instruments as honed sculptural forms, the constantly moving and changing mobiles could give a sense of this balanced interaction of varying parts. Furthermore, musical notes, once played, are a unique performance, and the fleeting nature of the configurations created by the wooden mobiles could reflect this.

The more I learned about the craft of making musical instruments, however, the more I was intrigued. The quietness with which luthiers (the makers of instruments) listen to and respond to the materials they have, craft their shapes and then let them go them into the world struck me as significant. Whether it is the luthier listening to the wood, the player listening to the instrument, the composer composing for how she hears that particular player, and the music seeming to listen back to the rhythms and sounds of nature, it feels that the listening is what draws all parts of the process together.

I was invited to create an installation based on the project for an arts festival (2020) in York, and was offered the use of a medieval church very close to York Minster: Holy Trinity Goodramgate. I was very lucky that Clare Dearnaley, filmmaker, agreed to be involved, and that when I contacted the renowned composer Sally Beamish, she too was interested in the project not least because her daughter, Stephanie Irvine, is a luthier and made the viola which Sally plays. In the early stages of developing this project it was also a great pleasure to visit Hansell Violins in Leyburn and luthier Peter Barton in Addingham. 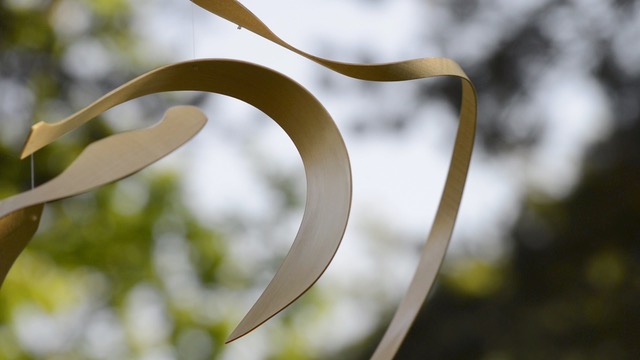 The festival in York was postponed but Clare and I carried on developing the project remotely as best we could. With no sense of when the festival might resume, we looked for somewhere else local for the first showing of the installation. I kept coming back to the idea of Farfield Meeting House, which is just 10 minutes from where we live. Farfield Meeting House, on the Dales Way in Yorkshire and surrounded by trees and hills,  is one of the earliest Quaker meeting houses. Built the same year as the 1689 Act of Toleration, this small and modest building is an important monument in the history of freedom of belief. We are now planning that the first exhibition of the installation will take place there in June 2021 (by appointment only).

Sally and Sophie made a remote recording of ‘Prelude and Canon’ for the London Mozart Players which has been used for the above short promotional film for the project. Clare is gathering footage from us all for the final film. She obviously cannot film any of us herself at the moment, so is relying on us all to give her pockets of footage we take ourselves which she will receive and amalgamate, finding a way to intersperse all the various components: trees, luthier, mobile maker, composer and player.

We hope that the installation Dovetailing, comprising sculptures, sound and film will be exhibited in other venues after Farfield. The various aspects can be reconfigured for different contexts and spaces, and could also incorporate performances and workshop activities.

The trailer at the top made by Clare Dearnaley gives an initial sense of how the project is evolving. A film for London Mozart Players featuring Sally Beamish and Sophie Renshaw discussing the project and performing ‘Prelude and Canon’ can be seen below.

In the autumn of 2020, we had the opportunity to do a small trial installation with the promotional film at an Ilkley Arts exhibition at the Manor House and it was very well received. One person commented: “I was completely blown away by your beautiful multi-media composition Dovetailing. It’s a work of peace and wonder which draws you into an enchanted world suspended in time. I loved the poetry of the narrative, the floating imagery and music mirroring the suspended, graceful shapes of the mobiles.” Professor Aurora Plomer

Below is a short film showing the trial installation, with the first mobiles hung and the trailer for the project projected onto a stone wall behind. 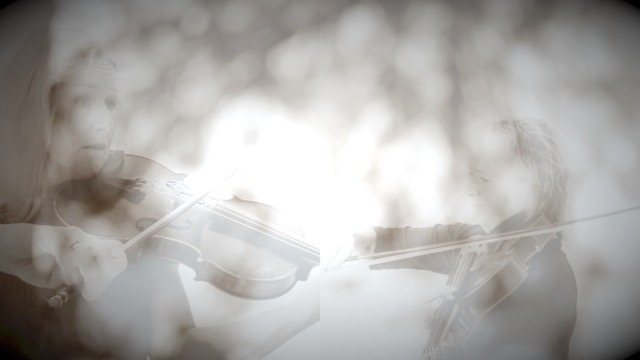 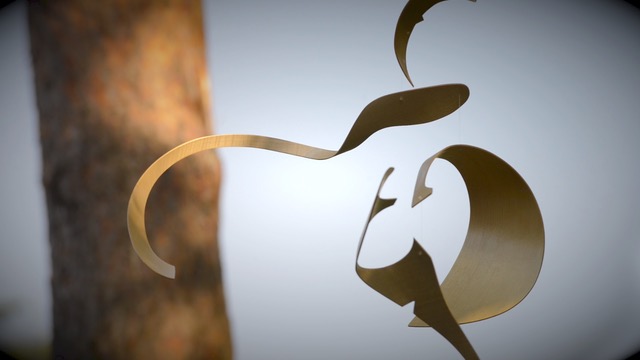 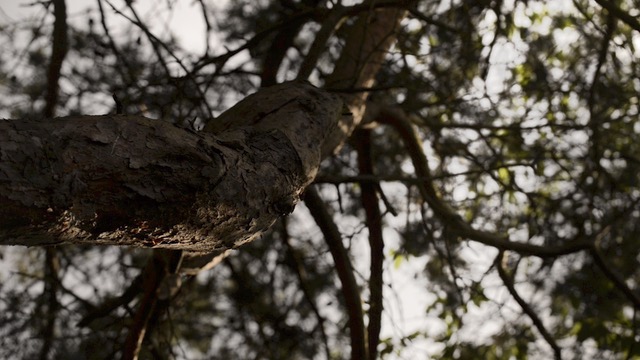 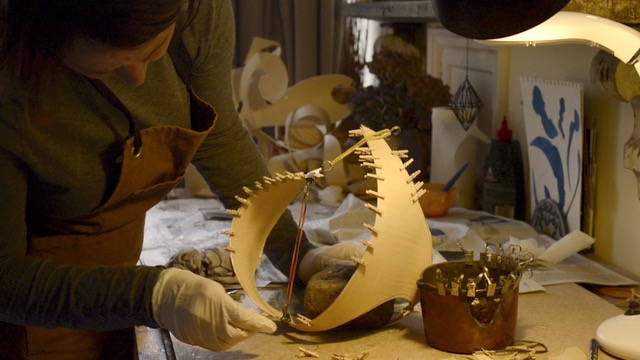 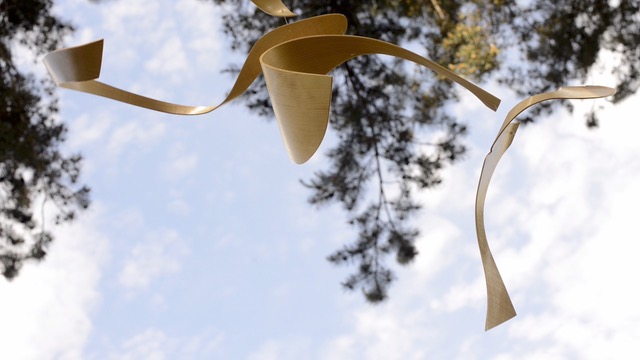 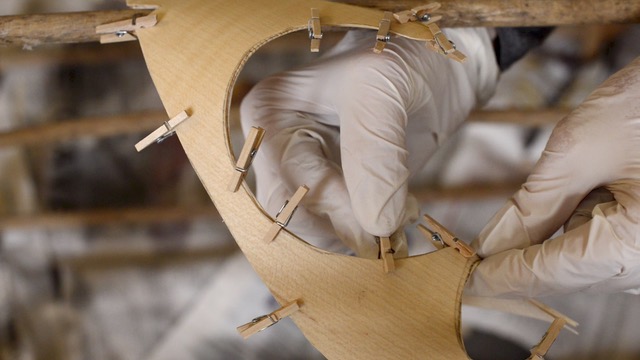 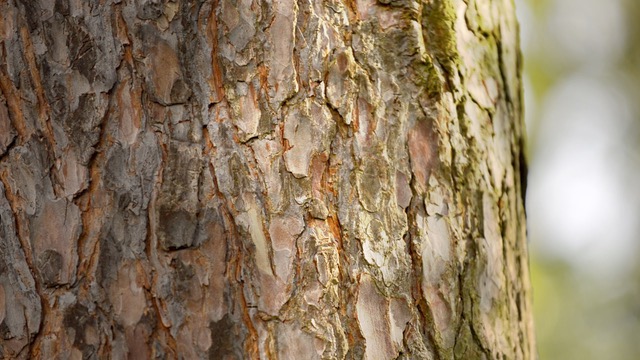 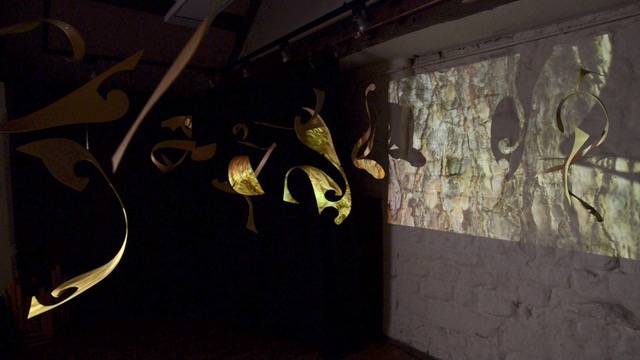 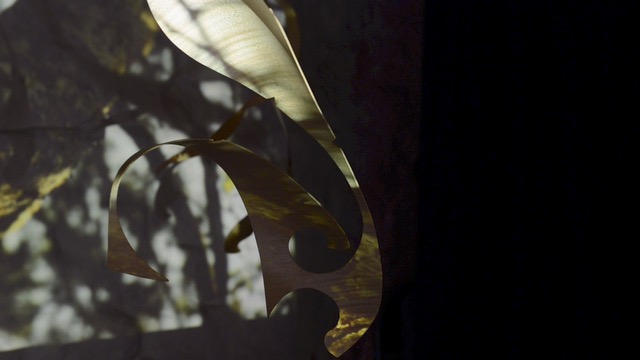 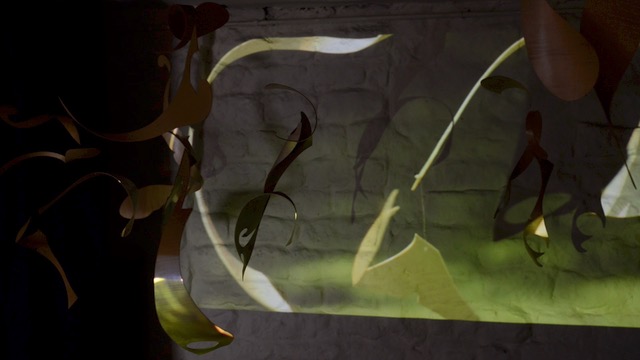 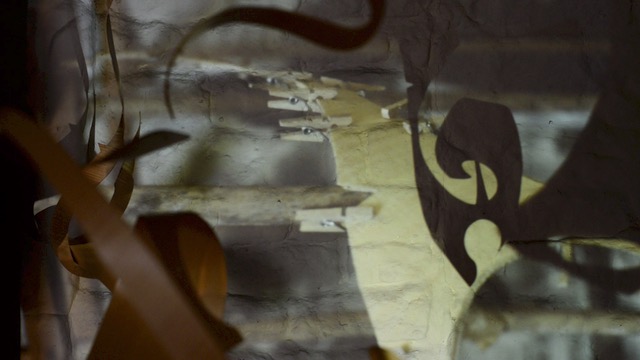 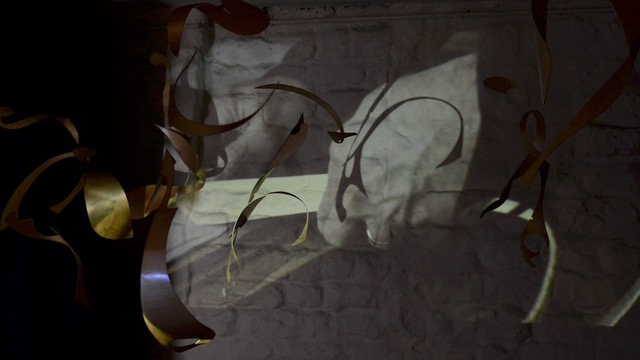 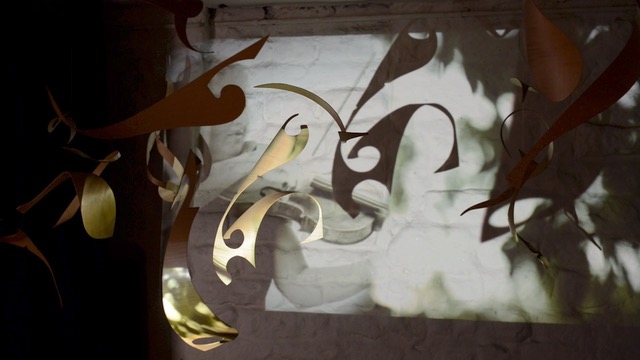 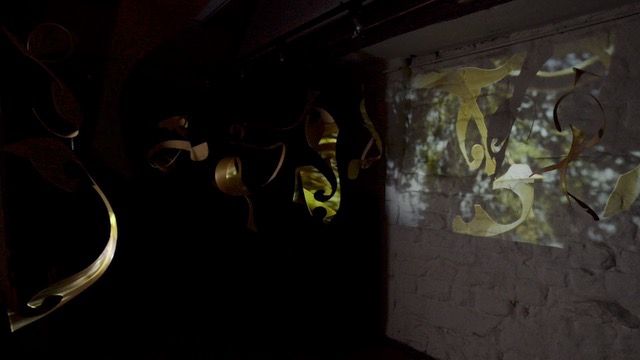 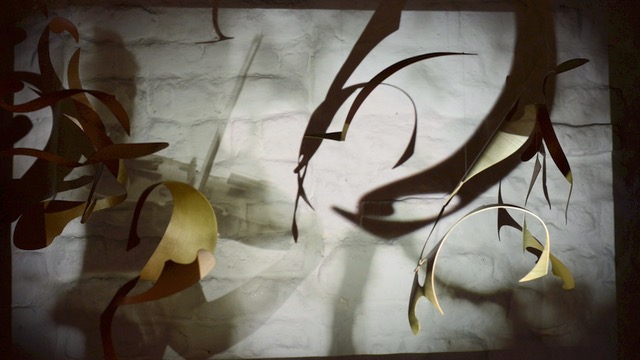 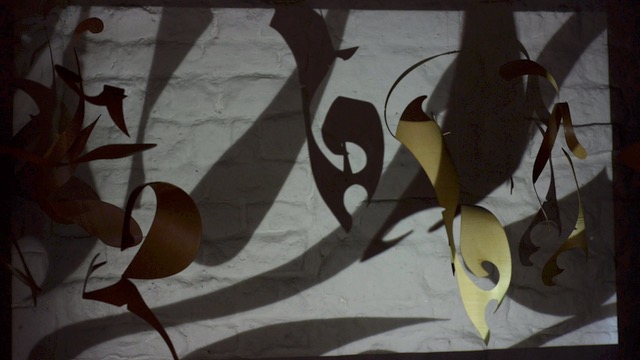 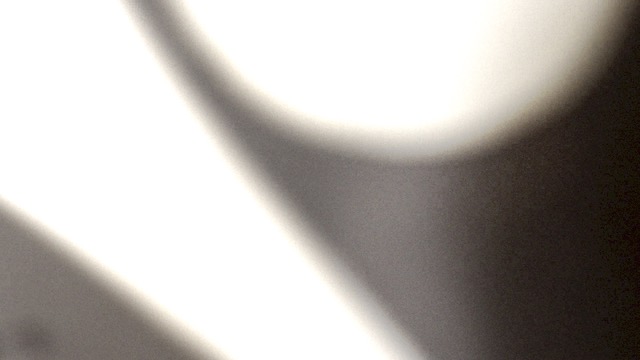 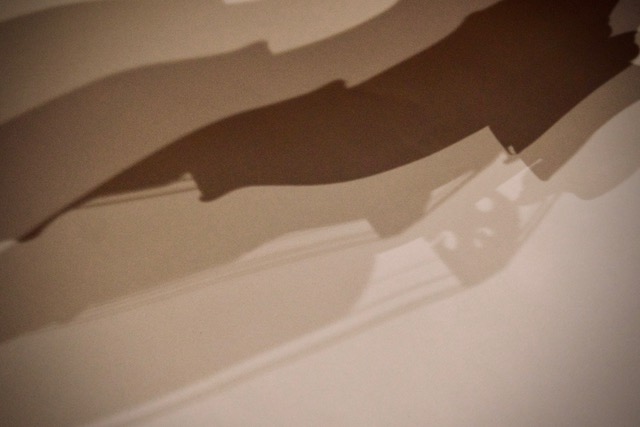 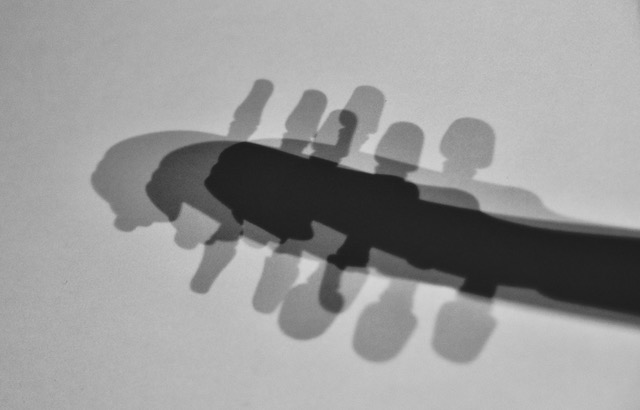