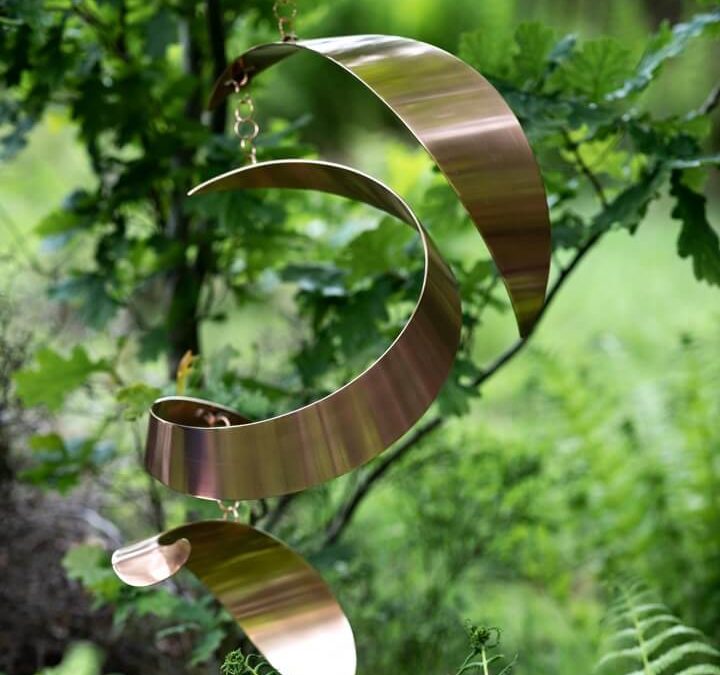 Joan Ransley, photographer and journalist, approached us with the idea of writing about and taking images of our Ilkley Moor series for the Ilkley Art Trail. Like us she has been shocked by the recent fires on Ilkley Moor. Ilkley Moor is a space of freedom and shifting light, commonly owned by us all and therefore a place for which we are all jointly responsible.

Joan and I took the copper mobile ‘Untethered’ which Jamie and I have recently completed onto Ilkley Moor and took a number of images (some shown here), a selection of which will be used for Joan’s article for the Yorkshire Post. As soon as the article is run, a link will be posted on this page.

We chatted about mobiles, balance, and how my working process begins with walking on the moor and observing and recording through drawing and photography the shapes and patterns which catch my eye. These slowly evolve into 3d forms in wood which I balance and compose into mobiles. Alongside the making of the mobiles, I have also been writing a series of poems. I have been inspired in particular by the dry stone walls, their structure and balance and the way in which they delineate the landscape. The title for each mobile comes from a poem in the series. I have called the series ‘Heartings’ as this is the word used for the rubble of stones which fill in the gaps between the larger facing and through stones. The heartings bind each wall together…

An excerpt from one poem about the building a dry stone wall:

“The letter A is the shApe

On which to model your wAll.

PrepAre the ground And sort the stones before

Build them up so that eAch level nArrows And

MAke sure the through stones extend right Across the wAll,

Locking it into plAce. The coping stones

On the highest level should be lArge And flAt

With A rounded top. StAnd them upright so thAt

They Are pressed tightly together, congA style.

PAck Any gAps with filling stones but remember thAt

Sections cAn shift And collApse And the wAll